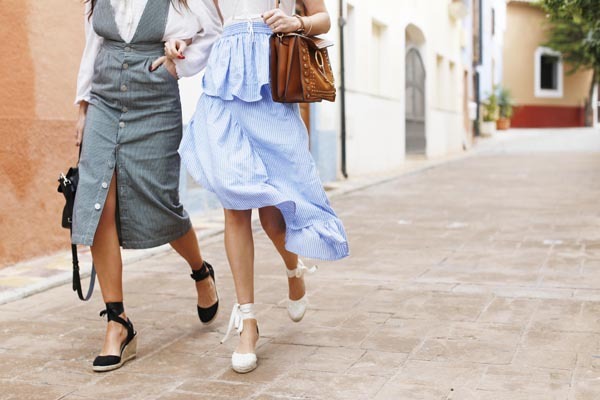 Meet the quintessential summer shoe: espadrilles. This ubiquitous vacation staple ​takes it’s name from the Catalan word ‘espardenya’, which is used to describe the canvas shoe with a coiled rope sole and vertical stitching. While the shoes are the sandal of choice today for everyone from fashion influencers to celebrities on the red carpet, espadrilles were actually the common footwear of peasant folk while the wealthy initially wore leather and silk made footwear. Espadrilles signified the class distinction simply by the people’s choice of footwear.

Espadrilles were most commonly worn by peasants owing to the price and ease of availability and the style quickly became popular in the regions of the Basque Country and Catalonia.

The production process was highly complex, requiring many craftsmen to create the treads, another artisan known as an alpargatera to create the rope soles, and finally a seamstress to sew the fabric upper and band. The result was a lightweight shoe- perfect for the warm climate of the Pyrenees and and flexible enough to mould to the active lifestyles of the wearer.

Espadrilles have strong roots in Basque culture. They were worn by everyone, from the King of Aragon’s infantry, to mine workers and priests. In addition to being worn by soldiers and laborers, espadrilles were also the go-to shoes for the Catalan national dance, ‘Sardana’. Dancers wore a specific type of espadrilles called “Espardenya,” that featured ribbons that tied around the ankles. They even became a part of the political movement movement in the 19th century where they signified specific regions during Catalan independence and the Spanish Civil War.

This fibre was created from grasses in southern Europe to make baskets, cords and shoes. These were then sold in the local area. The esparto fibre connects the various parts of the shoe together. It would wrap around the ankle, covering the toes and tying the sections to the sole of the shoe. ​This particular style of footwear was created to be simple and functional.

The espadrilles of today

In modern fashion history, espadrilles caught on in the 1940s, when ​Lauren Bacall​ wore an ankle-laced pair in the 1948 movie Key Largo. The shoes were favoured by the likes of Sophia Loren and Grace Kelly and political honchos like JFK, who was known to wear them while summering in Cape Cod. In the 1960s, French fashion house Yves Saint Laurent​ introduced them in wedged form.

Today, you see many different adaptations and different versions of this shoe. Different brands are experimenting with their own materials and styles and marketing them to different price demographics. Global artisanal value and importance is going up, so the more authentic and traditional the shoe, the pricier it is.

Rosantica’s accessories are a fashion lover’s dream. Designed by Michela Panero and crafted in Italy…

During the winter, the cold weather outside draws us into warmer places–closer to our loved ones. Na…