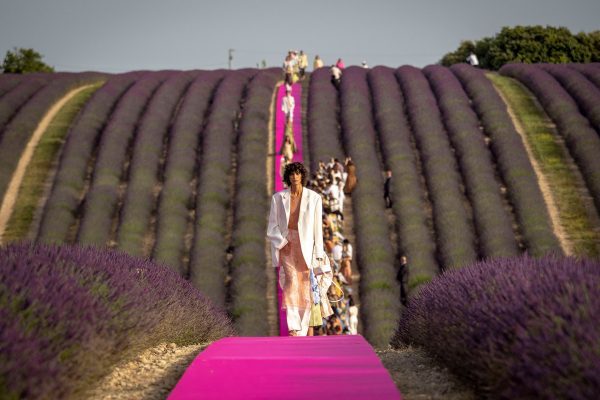 What are fashion shows? A quick search on Google yields more than fifty million hits within seconds and almost all feature elaborate runways ranging from lavender fields to the Trevi Fountain. Charles Fredrick Worth – popularly dubbed as the father of haute couture – was one of the first to introduce the concept of the fashion show in Europe, enabling his clients and potential buyers to personally interact with his designs and get a feel of the fabric, embellishments and finishings. At it’s core, the traditional fashion show remains just that: a sensory experience that enables the designers to showcase their concept to the audience and the editors, influencers, buyers, clients and fashion lovers that make up the audience (both IRL and digital) that participates in the designer’s vision via the collection.

The past few months have been significant in shaping the future of fashion shows as we know it. Even before the COVID-19 pandemic hit, the popularity of fashion week had been on the decline. In March 2020, however, when much of the world went into lockdown, so did the global fashion industry. The future of fashion weeks was up in the air, with many imagining digital to be the way forward. The British Fashion Council was the first to adapt to the digital format, converting it’s usual menswear showcase into a co-ed format that was showcased via the BFC’s new editorial website from June 12th – June 14th followed by FHCM’s first ever digital-only couture fashion showcase.

Balmain’s celebratory show-on-a-boat that the house’s creative director Olivier Rousteing sent down the Seine was a welcome relief and offered viewers a chance to revel in the exuberance that is synonymous with the house of Balmain, albeit from a distance. Also loved by industry folk was Jonathan Anderson’s show-in-a-box concept at both Loewe and JW Anderson that offered its recipients a much more tactile yet socially distanced glimpse at the house’s new collection. “The challenge was to put together a concept that is as tangible as a fashion show but more in tune with the way we are communicating right now,” said Mathias Augustyniak and Michael Amzalag, founders of M/M – the design studio responsible for bringing Anderson’s vision to life.

On Avenue Montaigne, the mood at the House of Dior was indefatigable, despite a global pandemic that had forced much of France into lockdown in March. In collaboration with Matteo Garrone, the luxury house conceptualised a feature film that showcased the Autumn/Winter 2021 collection, albeit in a minimised version. Creative Director Maria Grazia Chiuri was inspired by the idea of Théâtre de la Mode: a 1945 travelling exhibit of small-scale fashion mannequins that was very popular during World War II and which saw artists and designers collaborating to create something inspiring and beautiful during a very difficult moment in time. “These dolls were then shipped all over the world and the idea was to promote the idea that French haute couture was very much still alive,” said Chiuri.

Creativity comes naturally to fashion folk, it is the foundation upon which the industry has sustained itself through centuries. But how does these modern-day efforts fare when compared to a traditional fashion show? And most importantly, are they sustainable in the long run? Contributor at Vogue, Luke Leitch, opines: “While digital assets can be complementary, they will not make real-life fashion shows obsolete anytime soon. Clothes are all about contact; as a wearer, you feel them on your skin, and as a watcher, you process them with your eye. The watching part can be done secondhand, but the impact will always be second to the real thing.”

Fashion cannot be made – or processed – in a box. Jacquemus’s show in the midst of wheat fields was a breath of fresh air, enabling the audience the chance to see the clothes up-close and personal, rather than through a screen. While the show was smaller in scale in terms of the audience and the number of pieces showcased, it allowed audiences to step back into what the fashion show is actually about: the clothes. With a purely digital offering, brands also run the risk of having the concept take over the fashion; the ideal would be one that merges the best of both physical and digital for a new normal of a ‘phygital’ fashion show that ensures that the creativity of the human brain is explored beyond the realms of a traditional fashion show but keeps the primary focus on the fashion. With physical shows confirmed for September in London, Paris and Milan, it remains to see if brands can do just that.

Follow the AiSPi Instagram and check out our blog for more on the latest news from the European fashion industry.

A tale of woven dreams with Martina Spetlova

As the world continues to recover from the global pandemic, fashion month—as we know it—has changed.…

Hi Lena, let’s start by sharing with our readers a little about who you are and what you do. My name…