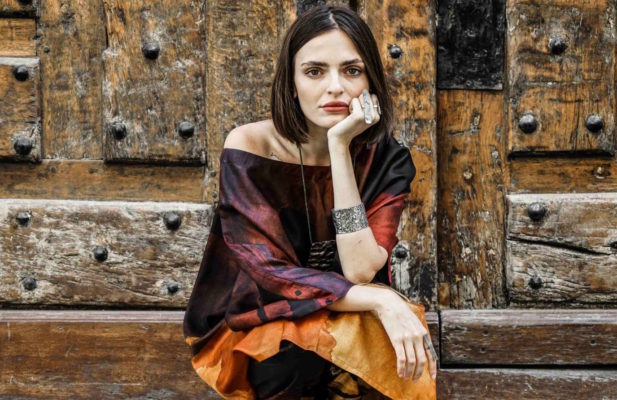 It was in July 2019 when I first interviewed half Indian half Norwegian designer Helena Bajaj Larsen. Fresh off her debut at Lakmé Fashion Week and a showcase at Vogue Talents – Scouting For India (where she was one of the finalists), Bajaj Larsen was ready to make her mark. In the two years since, the designer has gone on to feature in Vogue and launched her eponymous clothing and accessory line. Buoyed on by the COVID-19 pandemic, she also produced a fully digitized collection for Helsinki Fashion Week in July last year. 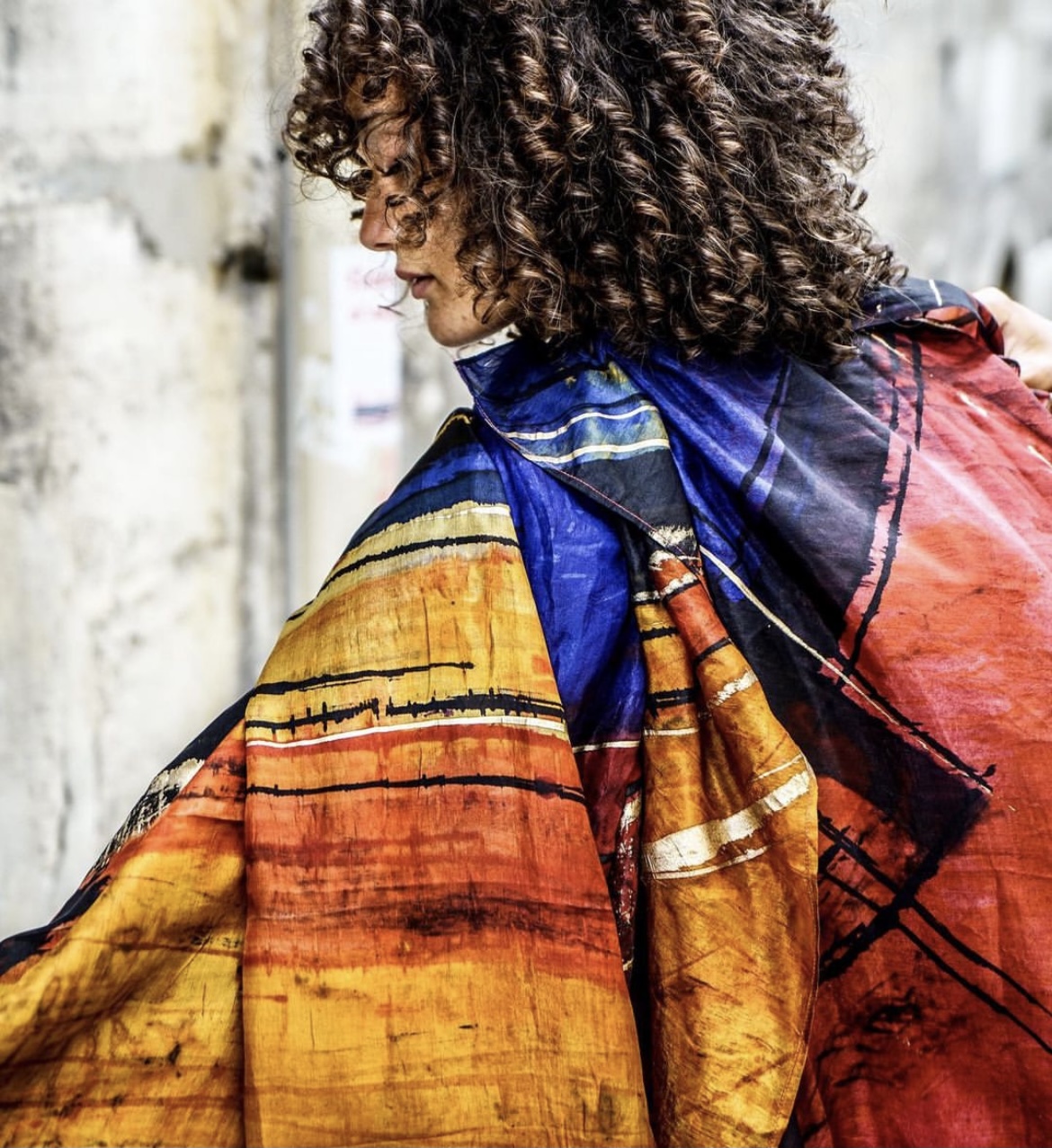 As a young girl who spent a significant part of her childhood in art museums and galleries with her mother – artist Sujata Bajaj, Bajaj Larsen knew she wanted to be a part of the creative industry from very early on. Her parents’ love for arts and literature influenced her greatly (her father, Rune Jul Larsen, is a Norwegian academic), as did the French culture. Says Bajaj Larsen, “The French and Japanese are two cultures who have really put an accent on the art of doing things well whether it is in fashion, art and food and the practice of incorporating that kind of savoir faire in my work is definitely something that I owe to my time spent living and growing up in Paris.” 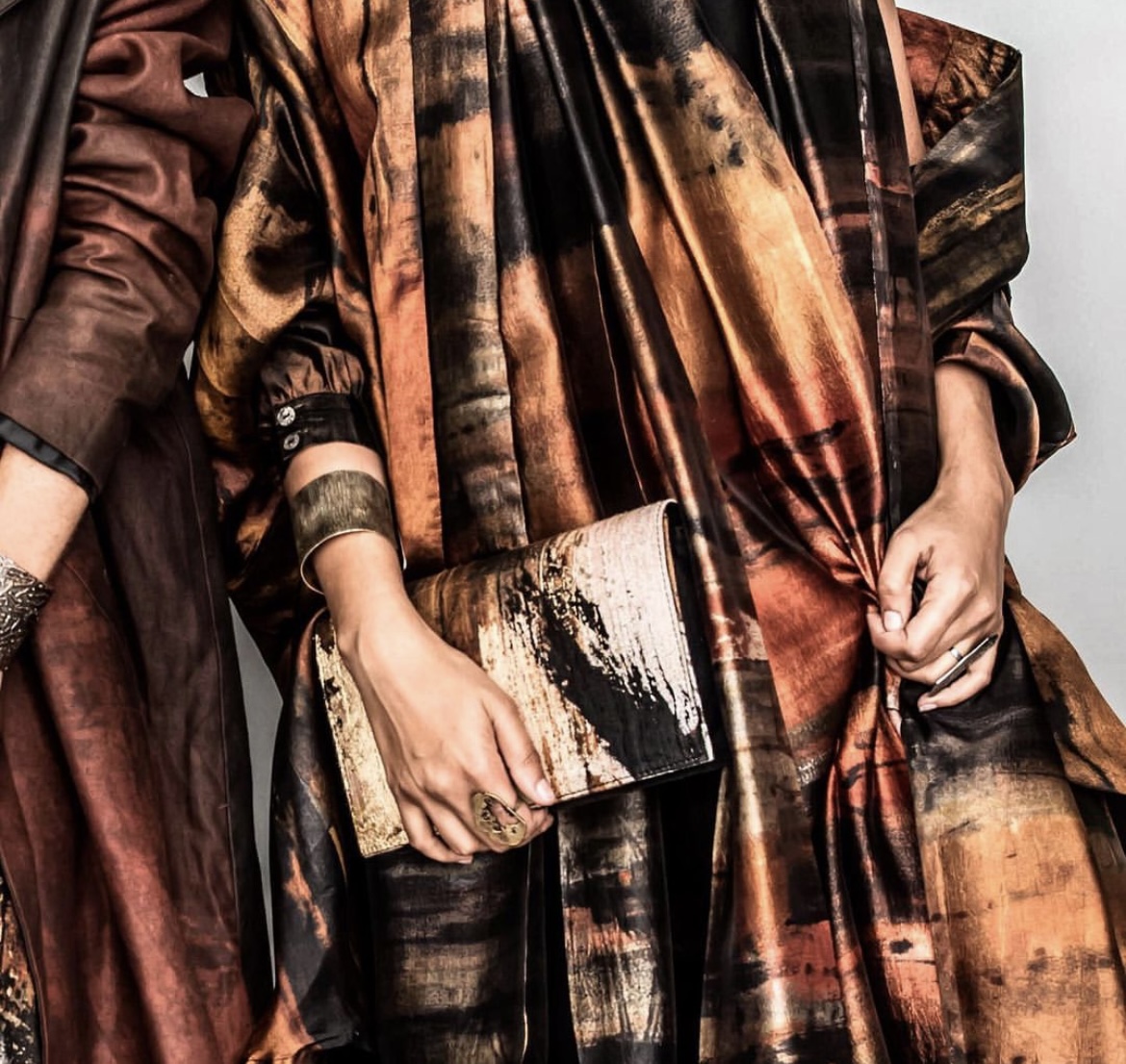 While Bajaj Larsen was initially considering studying economics, her artistic lineage soon came calling and it was at the Parsons School of Design in New York that she truly found her purpose. For her final year project, she chose to work with khadi – a textile with an extraordinary embodiment of social change and one that has a close affiliation to her grandparents, who worked closely with Mahatma Gandhi during the independence movement. Bajaj Larsen’s design genius lies in the way she works with the fabric; for the most part, khadi has been used to create garments that are light in weight, devoid of any embellishments and embody a minimalism of sorts. Helena Bajaj Larsen, on the other hand, chooses to renders hers with a rainbow of colours; from reds and browns to yellows and oranges.

As a design student who spent much of her time in school hunting for the perfect piece of fabric, Bajaj Larsen often could not find what she was looking for. “Everything looked the same”, says the designer. “The colors didn’t have enough depth, the patterns felt endlessly repetitive: geometrics, animal, florals. I would pick up these pieces and try to alter them as much as possible through various techniques, be it embroidery, paint, laser cutting, etching, appliqués, fusing.” Now, Bajaj Larsen makes her own fabrics and the endeavour is as detailed as one can imagine.

Working with upto twenty meters of yardage at a time, Helena Bajaj Larsen begins the extremely elaborate process by laying out the fabric on long tables, where they are dipped in acid dye. The colour variants are ample, for it is this which results in the high-impact prints that Bajaj Larsen is famous for. The designer also uses a wide range of tools while working – spades, brushes, sponges and sprays – that also allows for a more richer outcome. Once the fabric is steamed, washed and dried, Bajaj Larsen proceeds to add in the details used black, gold and silver pigment paints, which enables her to highlight the print while adding texture to it. 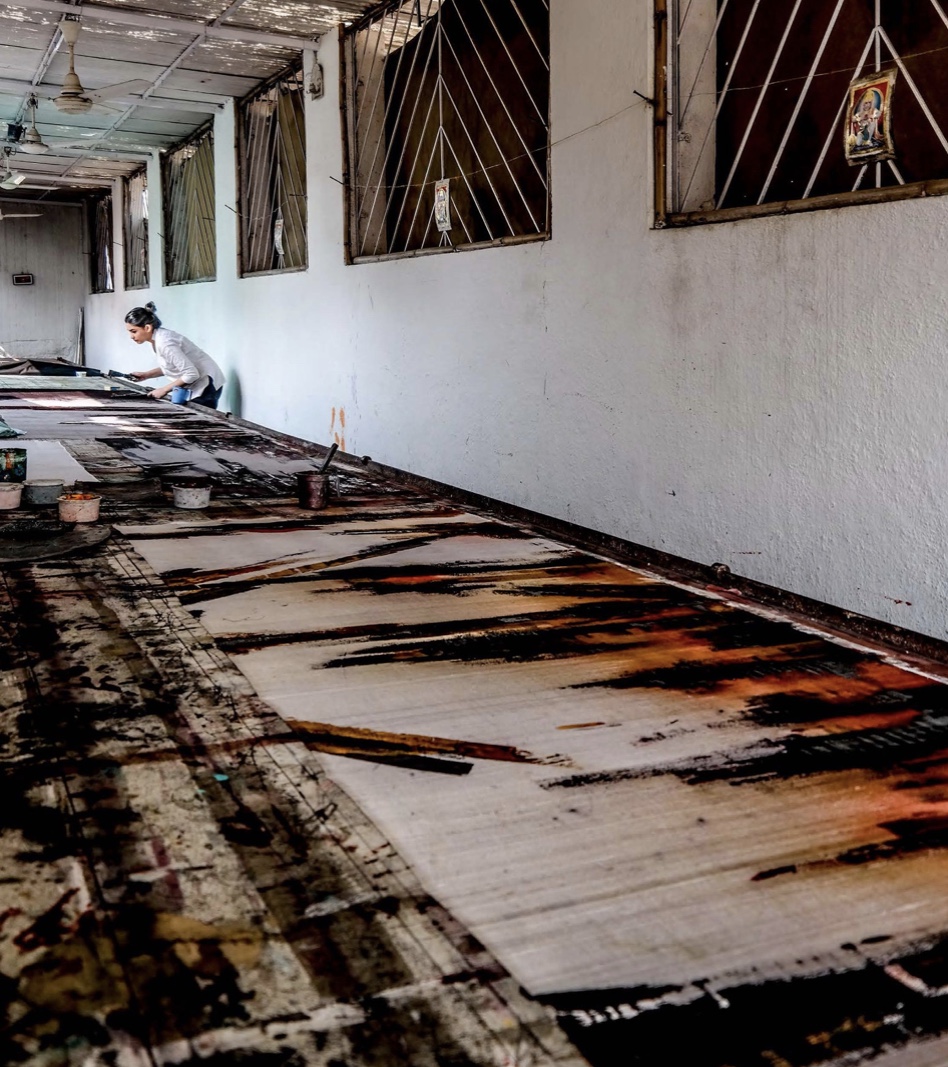 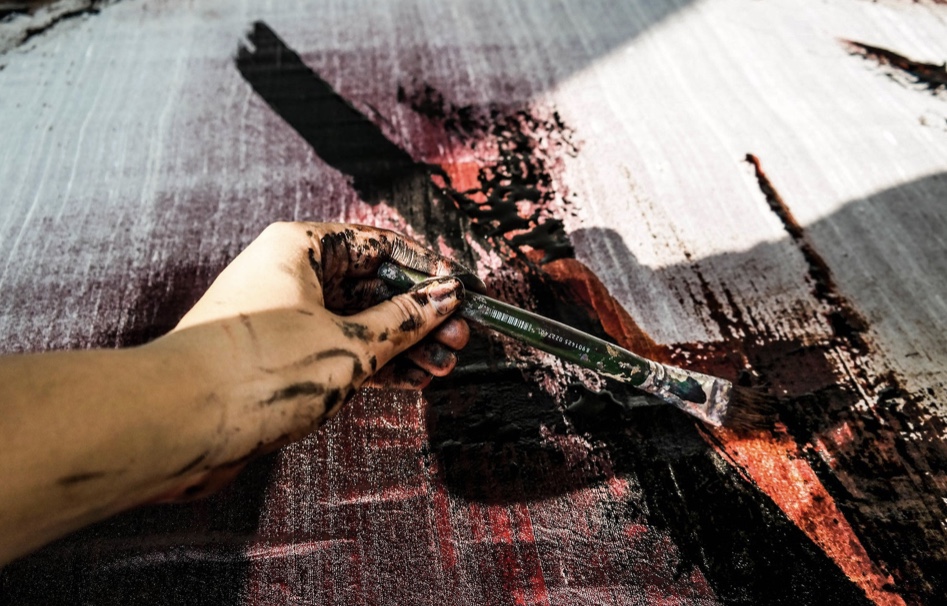 It is interesting to note that there is no digital or screen printing involved in Bajaj Larsen’s creative process; the designer works entirely by hand. “Each piece is a one-off,” says Bajaj Larsen. “My hope is that the client will view it as a collectible item (that) they cherish rather than acquiring yet another garment. The attention to detail is what is most unique to the brand; each inch of the piece is ‘visually calculated’.”

Even as she continued building her final year project at Parsons, Bajaj Larsen was – albeit unintentionally – already working on a line of jewels. Much of her design ethos is carried forward into her jewellery line as well; beginning with a single slab of metal (often sterling silver), Bajaj Larsen moulds her way to the final outcome, via an assortment of techniques that include overheating, etching, hammering, reticulation and granulation. Far from dainty, the pieces are highly reminiscent of Bajaj Larsen’s experimentations in surface design and crafted as wearable body sculptures in a sense that they are very raw and highly experimental. 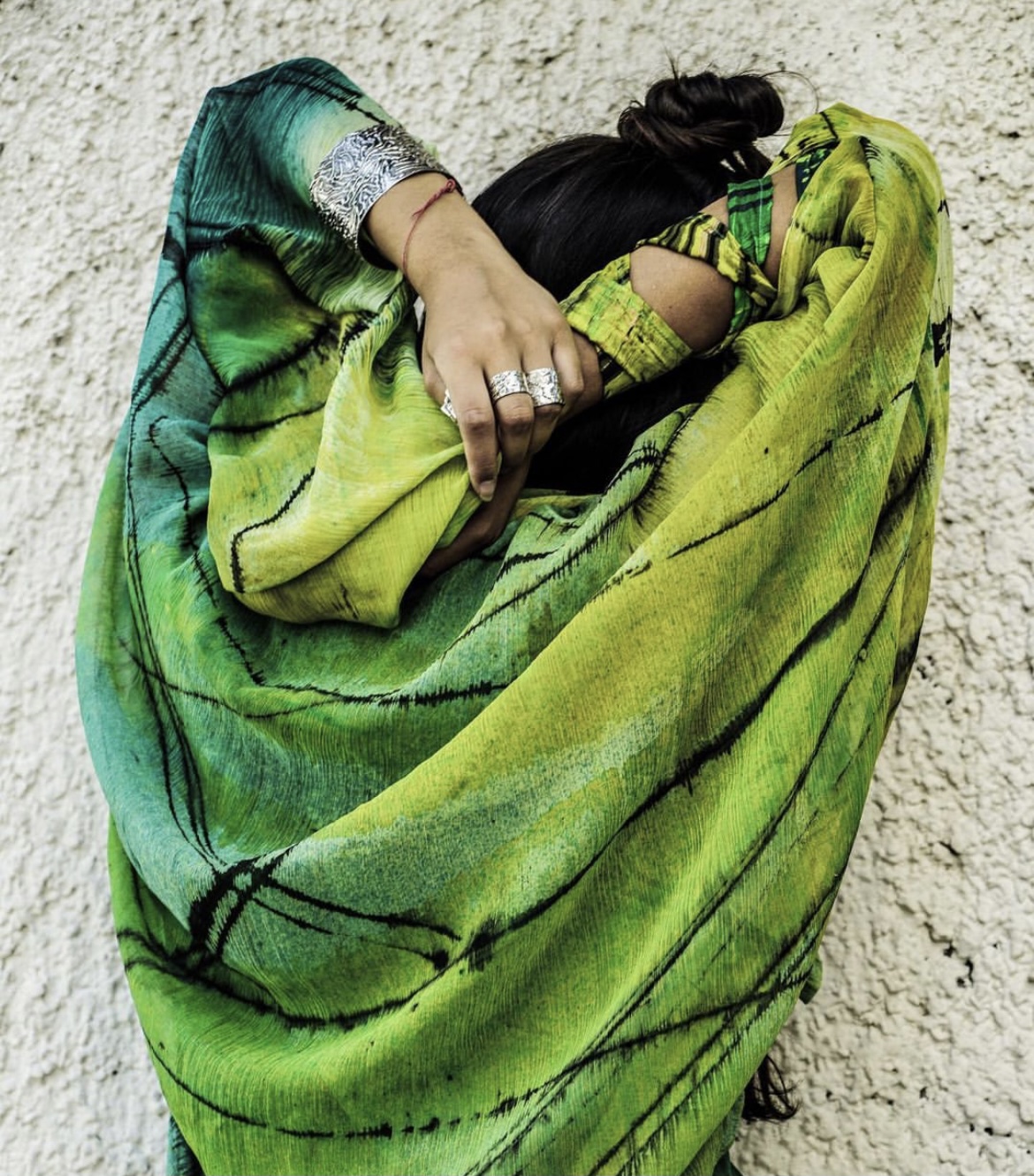 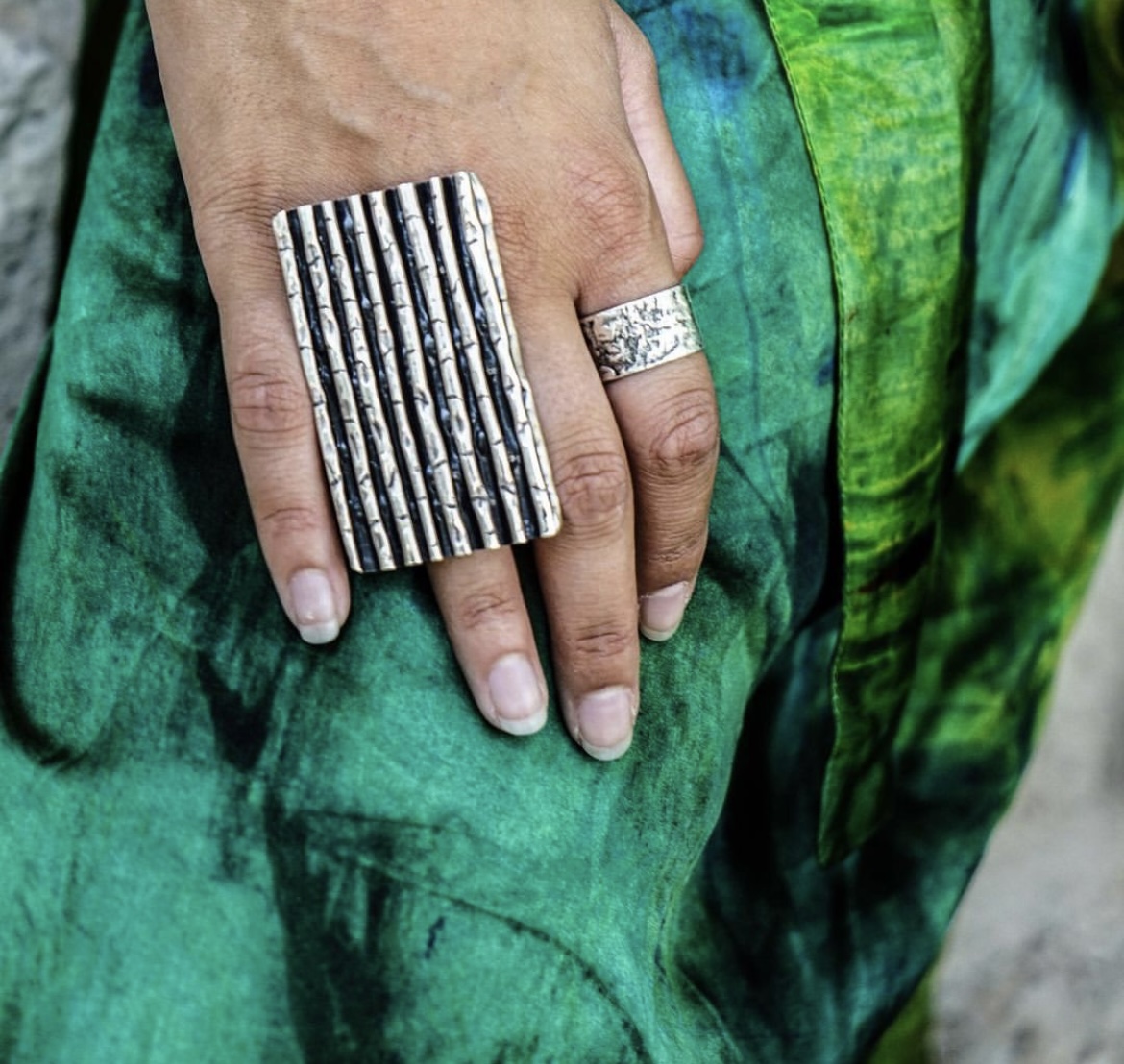 Bajaj Larsen’s prints find home in her line of polished ready-to-wear (that ranges from scarves to abbayas and the seasonal favorite face masks) as well as home decor that has found patrons in India, the Middle East and her home base of Europe. Her jewellery line is a favorite among her clients too. With such a vast repository of skills, it is clear that Helena Bajaj Larsen cannot be put into a box. If only just for the visual delight that her work provides, she clearly doesn’t even need to.

All images are courtesy of Helena Bajaj Larsen.

How 2020 changed shopping for me

When Mikkel Bjodstrup packed his bags for a vacation to Spain in November 2017, little did he know t…