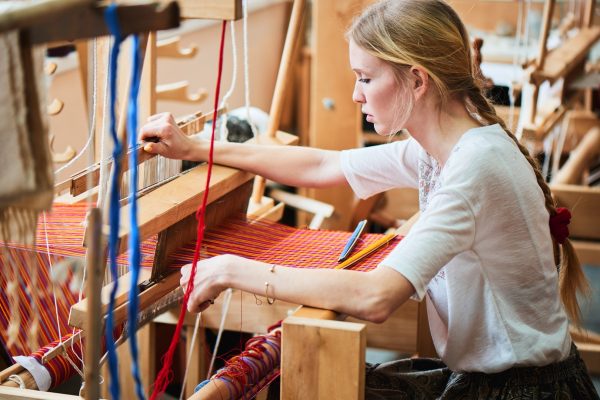 Tucked away on Rousse Hill in Lyon, AISPI discovered La Maison des Canuts – the district’s legendary silk museum and the only place in Lyon to experience the workings of the Jacquard Loom first-hand. Lyon’s history with the textile, though, goes way back – back to the 16th century, in fact. South of France is believed to have been the starting point for the production of European silk and even today, the city of Lyon stands at the epicentre of it all. Crowned as the birthplace of silk production in the nation by Louis XI, we are excited to discover more on a culture that goes back hundreds of years and may well be the only one of it’s kind in Europe.

To better understand what makes the Maison des Canuts so special, it is important to know how silk production even began in Europe. France’s trade with the iconic Silk Route dates back to as early as the 13th century and majorly contributed to the business development of the country. From the 16th century onwards, all fabrics that made their way into Europe via the Silk Route found a home in Lyon and over the course of the next hundred years, over 10,000 looms were present in the city – firmly cementing Lyon’s place on the European map as the undisputed leader of silk production.

This sudden pace birthed a new generation of workers called the Canuts. The Canuts worked out of the Croiz-Rousse in Lyon – a neighborhood that would be associated with them for a long time to come. AISPI loves the concept of their appartement-ateliers – the workshop out of which the Canuts spun the fabulous gold silk from. The spirit of workmanship wove a common thread between the Canuts; they formed a tightly knit community that supported each other through thick and thin.

In 1801, pioneer Joseph Marie Jacquard invented the mechanical loom that led the way for rapid industrialization of silk weaving. For over 500 years, Lyon grew in leaps and bounds as a well-known centre of silk production and allied trade activities.

Today, La Maison Des Canuts is a true delight for silk connoisseurs; the area of the museum is neatly divided into several different exhibition rooms where visitors get a first hand look at the rich history of the culture (a rare experience in itself!) including not just that of the textile, but of the workers who spent hours weaving the golden thread from start to finish, the life cycle of the silk worm, the contribution of the Canut workers to the international silk industry as well as the challenges the modern textile industry currently faces.

While for us, any trip to a new location is incomplete without visiting the local boutiques in the area, it is all the more essential that we do not skip out on a visit to the Maison Des Canuts’ gift shop. We hear that visitors can purchase silk scarves and accessories here that are all, of course, hundred percent made in France. Many of the scarves are hand painted and are available at extremely affordable price points, supplying income to the local artists as well encouraging customers to take back with them a piece of the culture that has, in the true sense, withstood everything from extreme wars to the economic challenges of today’s times.

Automatic looms along with new weaving techniques that make it quicker to produce the thread have replaced the Canut workers who imparted a personal touch to each thread. However, Maison Des Canuts is working tirelessly to ensure that the silk culture of the region is upheld for generations to come. With its recent inauguration of a train line between China and Lyon, the museum is all set to bring to long-time connoisseurs as well as more recent enthusiasts an experience that will ensure that the culture and the industry will only grow for years to come.

We can’t wait to see how the industry grows and prospers even further and are extremely thrilled to see the amazing work La Maison Des Canuts is doing to uphold a culture which has come to be one of the crowning jewels of not just Lyon, but of Europe itself.

All images are courtesy of La Maison Des Canuts

Like what you just read? Our blog and Instagram has more such features on the latest happenings in the fashion industry from Europe and beyond. Stay tuned and do not forget to sign up on our website for regular updates.

Meet the sustainable architect who is reimagining jewellery

By Ruxandra: from Brussels with love

Do you know what makes us, at AiSPi, tick? It’s reviews! Whether its from our customers or words of …

Today we had the pleasure of meeting Diane, the founder of the famous fashion brand Diane von Fürste…