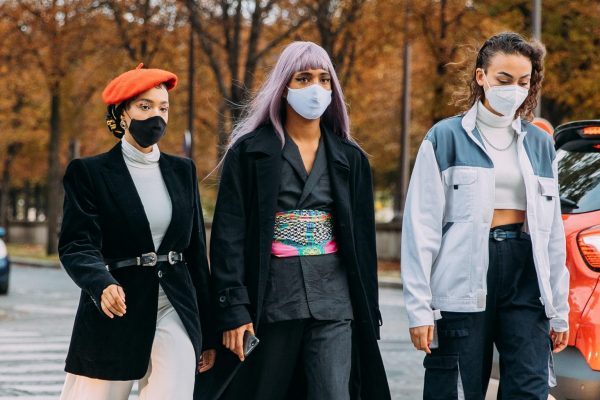 AiSPi final stop on the Fashion Month circuit was Paris, home to some of the biggest legacy houses and talented designers of Europe. Much like their counterparts across the border, French designers followed a ‘phygital’ manner of showcasing collections as well, hosting shows in stadiums to stores. While international travel restrictions and an air of uncertainty around the ongoing pandemic meant that many of fashion week’s regular guests could not attend the shows in person, fashion houses still made a diligent effort to make their virtual attendees a part of their shows, both physical and digital. Below, AiSPi covers the PFW Spring/Summer 2021 runway and the details that ensured that despite all odds, the show this season went on.

Where was the runway at Paris Fashion Week this season? As it turns out, everywhere but. At Celine, models strode down the track at the Louis II stadium in Monaco, clad in Hedi Slimane’s signature designs. Back home in Paris, Nicolas Ghesquiere sent his models down a runway at the uber futuristic LVMH La Samaritaine department store. The twist? Cameras dotted the entire store, allowing digital viewers to view (and hear via the live mics) every single detail in real time. The runway – and other poignant areas – also featured strategically placed green screens; digital viewers watched the show against a backdrop of Wim Wenders’s famous film Wings of Desire. Keeping up with the spirit of 2020, the Spring Summer 2021 at Dior was live-streamed on TikTok and was presented to a limited number of (and socially distanced) guests in a tent in the Jardin des Tuileries.

Chinese designer Masha Ma – one of the few who has been taking the French fashion world by storm in recent years – showcased her Spring Summer collection that included tough chic biker jackets emblazoned with the words ‘Need Redemption’ and accessorised with chain necklaces worn as belts and bracelets. Paris Fashion Week’s showrooms at Sphére opted for a phygital approach to ensure that it’s patronage of emerging brands continues despite travel restrictions and the uncertainties surrounding the pandemic. This season, nine emerging brands – Bluemarble, Boramy Viguier, Boyarovskaya, EgonLab, Germanier, Kenneth Ize, Mansour Martin, Mossi and Thebe Magugu – participated and were supported by B2B sales platform Le New Black. Buyers scheduled appointments and placed orders both in-person and virtually and the event ran for the entire duration of the week. For Pascal Morand, executive president of the Fédération de la Haute Couture et de la Mode, the aim was to offer a coherent and complete package to accompany brands. Said Morand, “It’s not just about a virtual showroom, it’s the articulation, in both the physical and digital realms, of creation, communication, sales and organization. That’s the real subject.”

2020 has seen fashion houses get truly creative with their invites but, as it turns out, a touch of tradition is always welcome. Louis Vuitton sent it’s guests (both far and wide) personalised invites rendered in luxurious card paper and replete with stunning calligraphy. After it’s amply ‘grammed and much loved ‘show-in-a-box’ invite in July this year, JW Anderson sent out a second version of the boxed invite for their Spring/Summer 2021 shows. The innovative concept meant that each recipient received a box that included a bound book, photographs, craft paper and a full look book that enabled attendees (especially of the virtual kind) to recreate their own version of the show and connect with Anderson and his creative process a little more closely.

Keeping in mind the mostly somber mood that was synonymous with fashion weeks across Europe, attendees at the shows stuck to a largely muted colour palette of blacks, cognac and beige. In lieu of extravagant garb, attendees stuck to pragmatic daywear and unfailingly topped off their looks with masks and other face coverings.

While fashion month may be over, the festive season is only just beginning.

Follow us on Instagram and check out our blog for more on the latest news from the fashion industry in Europe and beyond!

The best 5 pieces to wear everywhere