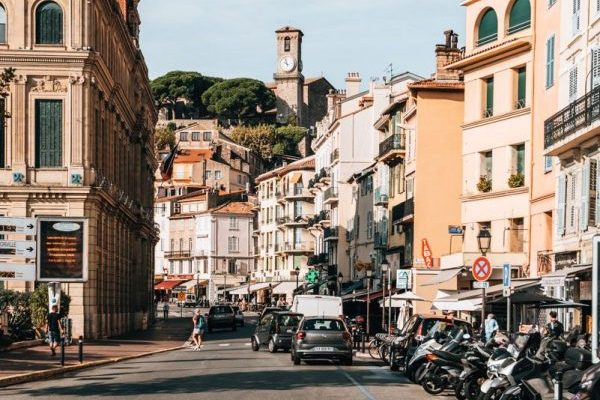 The South of France is renowned for it’s picturesque locations but our guide below will help you to discover experiences that have been previously unheard of from one of France’s most popular tourist destinations.

Drive to the Mercantour National Park, which lies further North and shares the border with Italy. The scenic drive takes you through gorgeous valleys, quaint little French towns, and home-run restaurants where you may sample some locally produced cheese. If you meander through the Maritime Alps, you will reach the sleepy village of Isola.

The best part of the drive is that it takes us to unchartered territory, close to nature and away from the glitz of the French Riviera.

Visit the picturesque sea-side town of Villefranche-Sur-Mer. Enjoy at a road-side café overlooking the sea, then go for a dip in the waters of the Villefranche beach which is one of the most pristine beaches of the French Riviera.

On your drive on the Grand Corniche (A corniche is a road cut into the edge of a cliff), the highest of the 3 corniches that run from Nice to the Italian border, explore the small medieval village of Èze. It boasts of one of the best views of the French Riviera. At one point on the Grand Corniche you get a spectacular view of the Mediterranean sea with the perched village of  Èze in the foreground. You HAVE to stop and take this view in – it is truly stunning.

The last stop for the day – the municipality of Monaco. Explore Monaco-ville, a picturesque part of the city that is still a medieval village at heart with quaint cafes, pedestrian streets, and a magnificent Palace.

This medieval town, also known as the perfume capital of the world. Grasse, thanks to its inland location and altitude, lends itself well to flower farming. Fields of flowers and perfumeries dot the town roads.

From the fragrant town of Grasse, we made our way to the seaside resort town of Antibes. Everything about this quaint little town is mesmerising. From the walk along the harbour to the numerous squares that house cute little cafes and restaurants doling out exquisite dishes, Antibes is magical. No wonder Pablo Picasso spent six months in a sea facing Château painting master pieces. The same Château is now a museum dedicated to the world renowned artist.

Walk over to the Provencal market in Cours Massena in the Old Town to savour fine cheese, cured ham, and ambrosial wine. The best, however, is yet to come. End the evening by paying a visit to the ‘Green Fairy’ (Absinthe) at the Absinthe Bar, which is right besides the Provencal market.

World renowned for hosting a popular film festival, Cannes, which was once a quiet fishing village, has been transformed into one of the most opulent  towns in the world. Known for its fancy boutiques, Cannes is a shopper’s delight. Once you venture into the old town, you tend to fall in love with the cobbled alleys and the street art.

In the bay, off the coast of Cannes, lie Îles de Lérins (Lérins islands), that are accessible only by ferry. Two of the islands – St. Margaruite (the biggest and the closest to the shore) and St. Honorat (smaller and further) are accessible by ferry. St. Honorat is quieter than the other and has a beautiful monastery and a castle overlooking the sea.

St. Tropez and Around – Cotignac & Porquerolles

Nestled under limestone cliffs, the medieval village of Cotignac was once known as the “Saint-Tropez of the Haut Var,” the northern part of Provence, where the jetset circle would escape the crowds of Saint-Tropez to throw extravagant parties. These days, the village is more about keeping its picturesque locale and natural beauty a bit of a secret. Stop in on Tuesday when the village’s main drag transforms into the bustling weekly market selling everything from fresh fruit and vegetables to truffle-filled cheese, and locally made charcuterie and honey.

While you’re in rosé country, make the rounds sampling wine straight from the source. Cotignac just so happens to be the spot where award-winning Mirabeau rosé is made, so swing by the winery in the center of town for a tasting and take a few bottles to sip on later. La Table de Fanette, known for their truffle-infused dishes, picked and prepared by the chef herself is a nice place to check out as well.

In Provence and Around – Gorge du Verdon & Calanques National Park

Picture this: you are driving along the winding mountain route D952, switching back and forth between shady forest and open skies. Suddenly, a flash of bright neon green-blue appears out of the corner of your eye. Lake Verdon. It peeks through open patches of tree, until the road and my view are completely unobstructed. Wow.

Other villages and towns

Roussillon: for natural beauty and nightlife

One of the most beautiful villages in Provence, this town is set aside gorgeous ochre cliffs, and when the sun sets, it sets the cliffs gloriously ablaze. The architecture matches this intense hue with buildings to match. The orange facades of the buildings look as if the paint was taken straight from the cliffs themselves — because it was! Roussillon is definitely one of the livelier of the villages in Provence in terms of nightlife.

Gordes: with hordes of tourists and gorgeous views of the Luberon 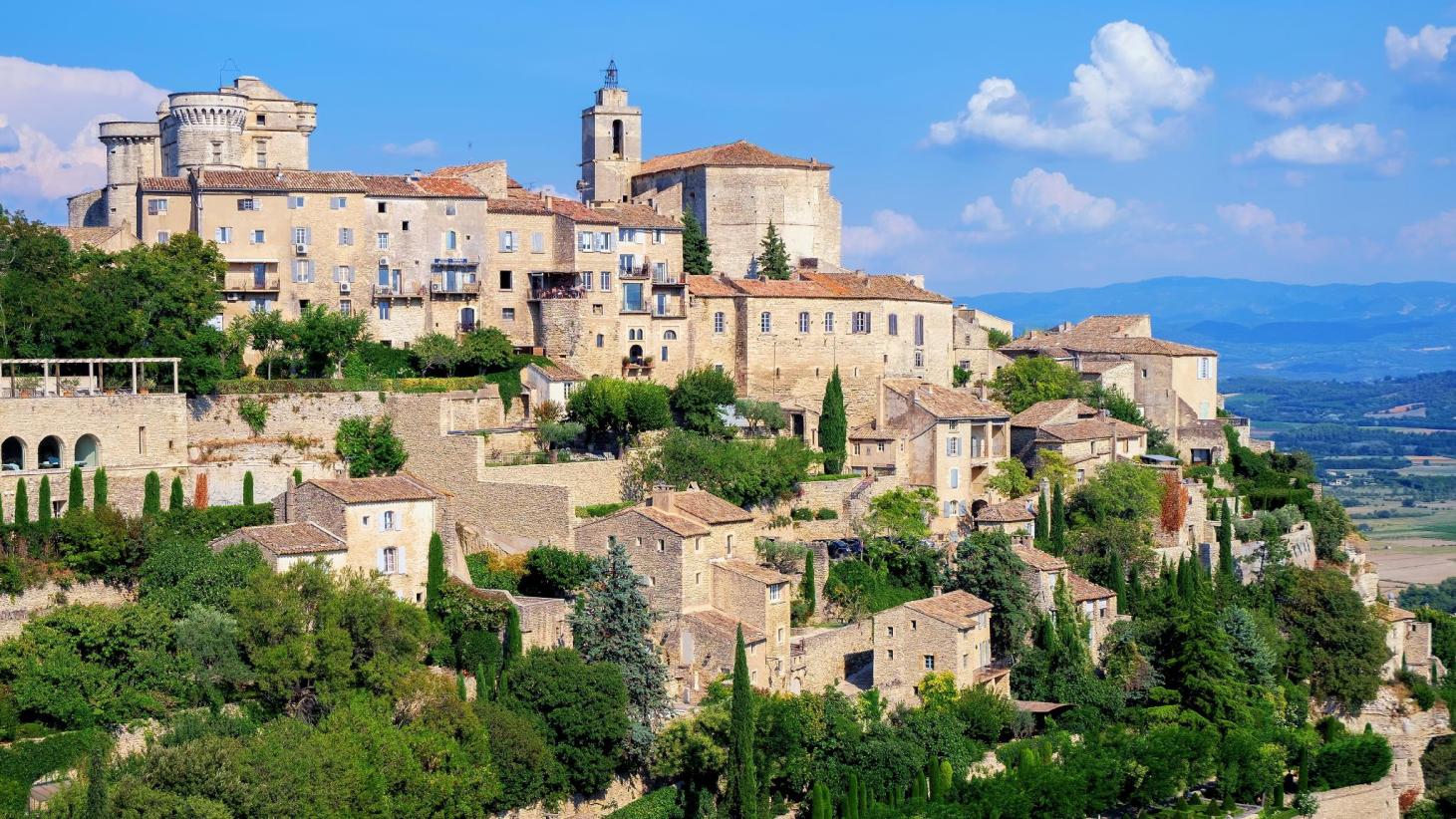 This hilltop Provence village is worth visiting for the stunning vista alone, which looks out over the amazing Luberon Valley. On your way up the mountain up to Gordes, you get the most beautiful view of the entire town built on the hillside. It’s like something out of a fairy tale (except that most fairy tales don’t include selfie-stick wielding tourists). Still, everyone flocks there for a reason, and despite being filled with tourists, this Provencal village is chock full of charm. Gordes also has one of the more charming centers, with alleyways that are easy to get lost in, and a beautiful 12th-century church. It also has the added benefit of being close to the iconic Abbaye de Senanque, with its gorgeous lavender fields that are on everyone’s European bucket 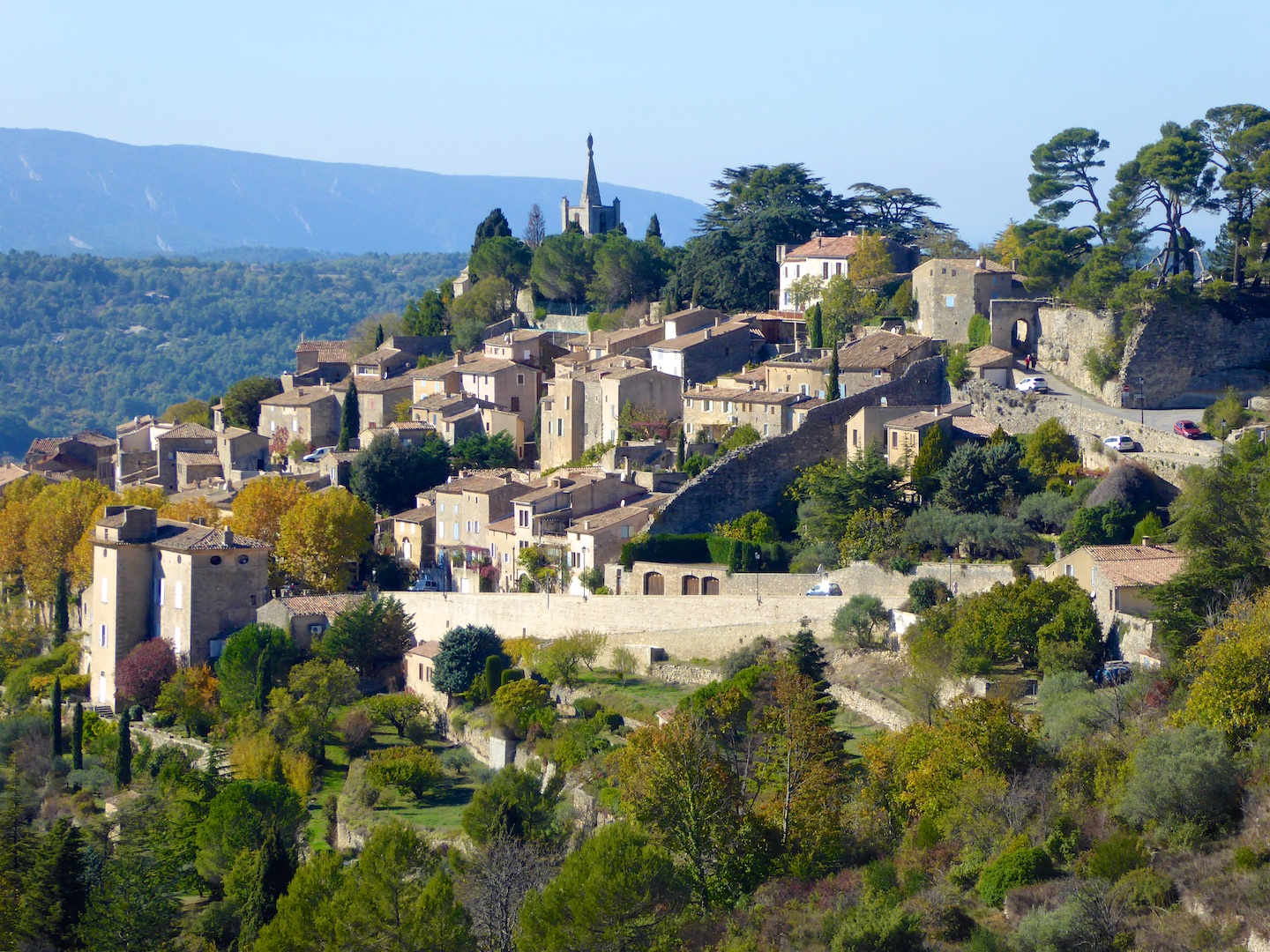 Like Gordes, Bonnieux is considered one of the most beautiful villages in Provence, though this time the view you get is best upon leaving the city headed towards Buoux. In fact, if you drive towards Buoux, you’ll encounter one of the most beautiful open lavender fields that all of Provence has to offer — at least, it was the prettiest we found in our week of road-tripping around the French countryside.

There’s also a 12th-century church up at the top of Bonnieux, which you usually can’t enter – but it’s worth a walk up to the top to get these views of the Luberon Valley spread out below you.

Of all the villages in Provence, this one has perhaps the most natural beauty. This cute little town is set on the beautiful Sorgue River, which must be seen to be believed. It almost looks as if a jungle has been permanently flooded with the clearest water you’ve ever seen.

So much plant life grows at the bottom of the river that it is a vibrant shade of green, both alien and wholly natural. Where the river gets deep, there are spots of brilliant blue turquoise. There is an amazing kayaking trip starting from Fontaine-de-Vaucluse and ending in L’Isle-Sur-La-Sorgue that I highly recommend doing while in the Luberon area of Provence. 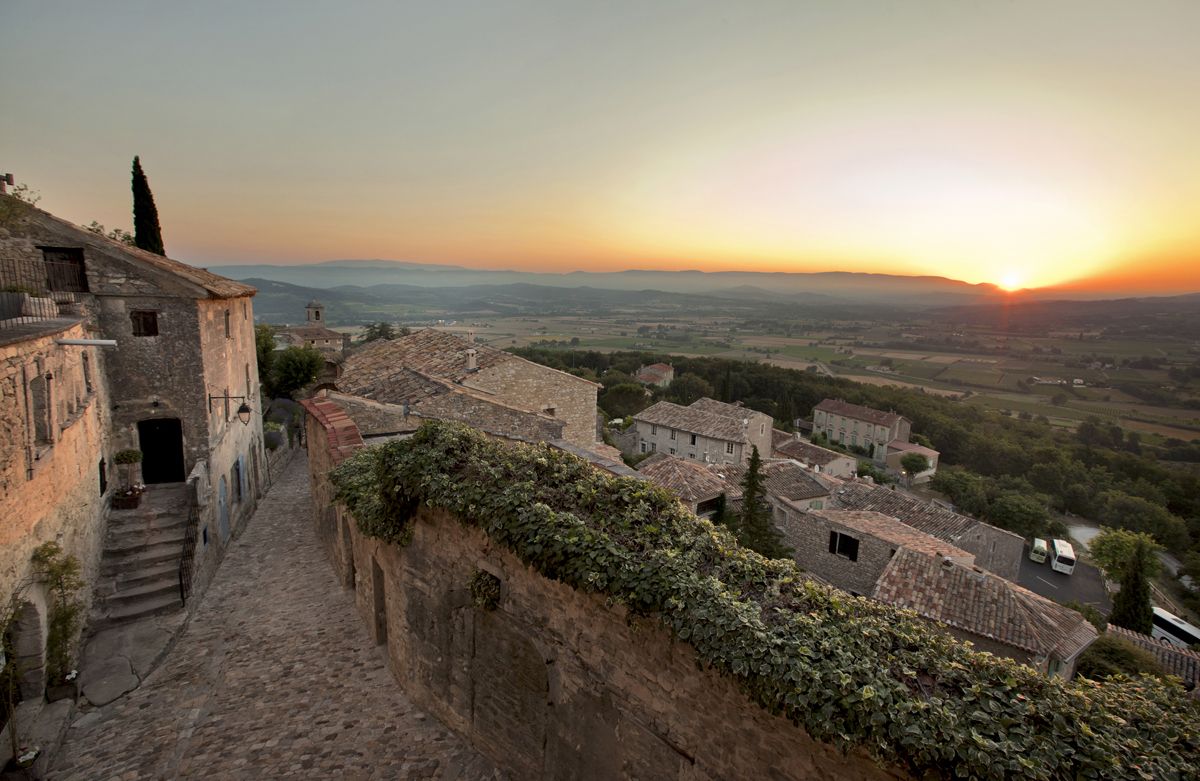 This small town is best known its most famous resident: the Marquis de Sade, the man who gave his name to sadism by garnering a reputation for his… strange sexual habits. His history lives on in the remnants of his burned down castle at the top of this quaint little hilltop village in Provence.

Unsavory history aside, this is a beautiful little town, with a few cafés and not much else. It is also home to an art school, so there are quite a few American and other foreign exchange students. Because of this, it has a younger vibe than the rest of the towns, which skew older. The Café de Sade is a great place to lunch, with gorgeous views looking over the Luberon Valley.

Goult: the just-right village for travelers in search of calm and charm 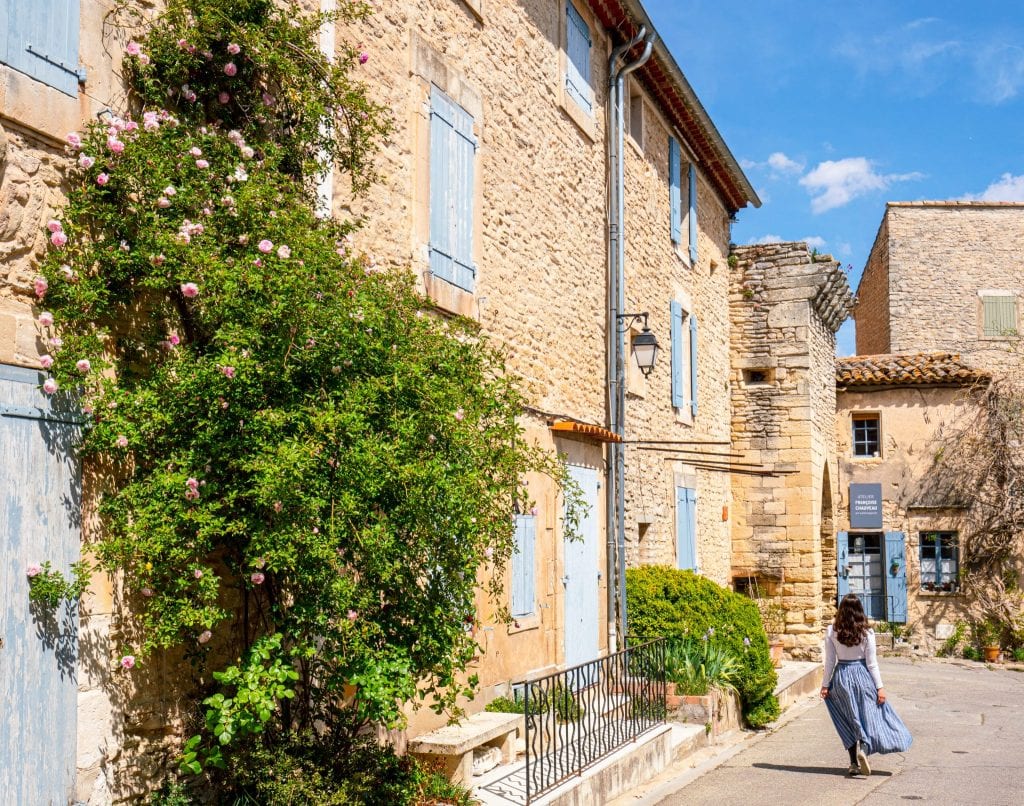 This small Provencal village lacks the big draws of the other – and therein lies its appeal. It doesn’t have the gorgeous mountainside views of Gordes or Bonnieux, nor the stunning ochre cliffs of Roussillon. It has a sense of peace and quiet that other hill towns don’t have. Like all of Provence, there are plenty of tourists; you’re just as likely to hear English or German as French. Still, the day-trippers with their selfie sticks seem to have not descended on Goult – at least yet.

The architecture is also some of the most beautiful, in its understated way. The facades of the buildings are either limestone brick or pale hues of salmon. The potential monotony of this palette is dispersed with doors and shutters in vibrant pastels, so photogenic that I couldn’t stop snapping away every few minutes. Goult’s Thursday market is unreal, a hedonistic celebration of the senses: lavender sachets and spices, crisp soft linens, the ripest strawberries, the softest cheeses 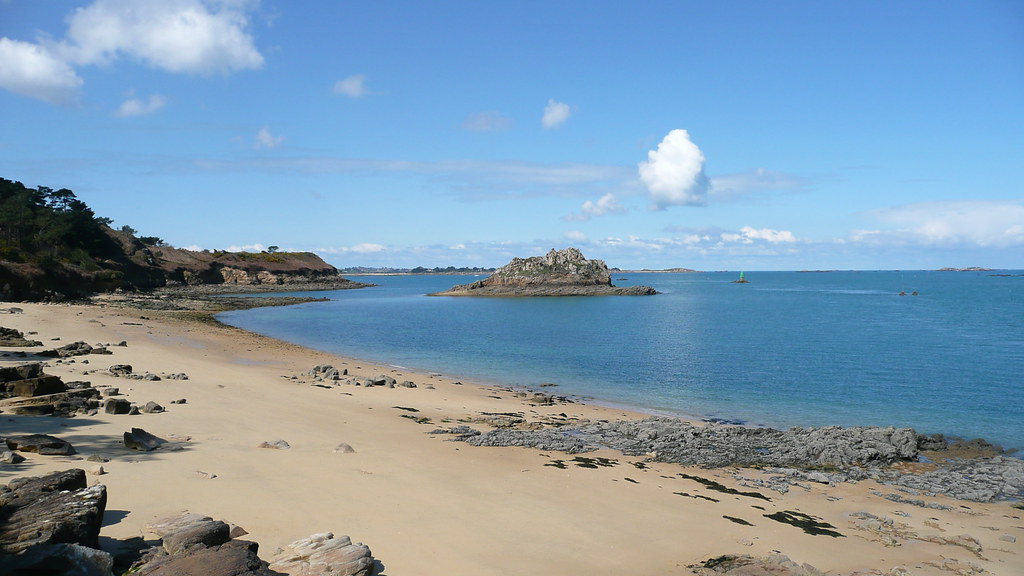 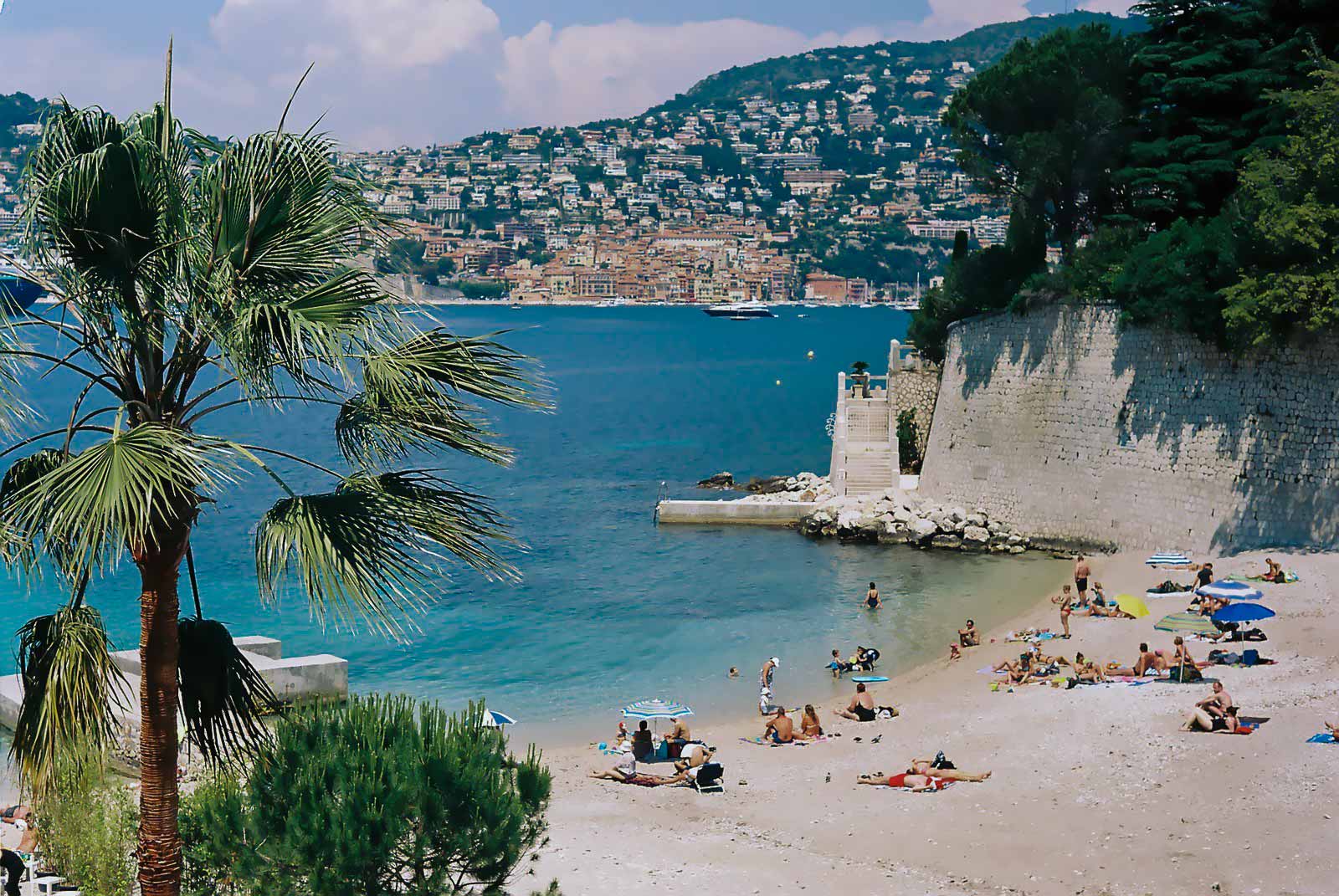 St-Jean-Cap-Ferrat. Peaceful, shady cove at the tip of the peninsula.

Cap d’Ail. Trendy private beach for beautiful people, among them, the Grimaldis. 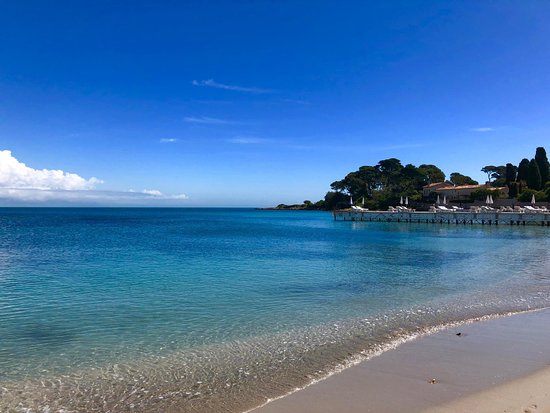 Cap d’Antibes. The cove immortalised in F. Scott Fitzgerald’s Tender is the Night.

Check out A Travel Duet to get customised plans for your next getaway and don’t forget to follow us on INSTAGRAM for the latest from our ongoing fundraiser.

Follow the AiSPi Instagram and check out our blog for more on the latest from the European fashion industry.

7 experiences in France to add to your bucket-list

A tale of woven dreams with Martina Spetlova

AISPI: How do you pronounce it? How do you spell it? What does it even mean? …

The birthplace of the Renaissance, the city of Florence is known for its history. Since the 14th cen…