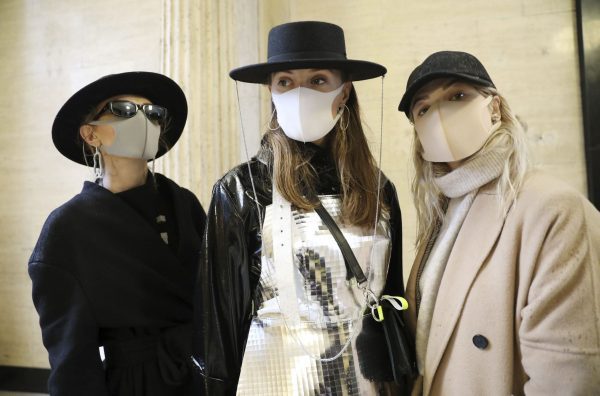 Nearly four months after it was first detected in the Chinese city of Wuhan and more than a month after the WHO declared it a pandemic, the novel coronavirus continues to disrupt the global economy with fashion one of the many industries that is bearing the brunt of the impact of the virus. While a majority of the fraternity had initially adopted the new normal of working from home, a certain faction of the industry has now pivoted it’s efforts towards mitigating the impact that the pandemic has had on businesses across the world while contributing to relief efforts within the community.

In lockdown in Italy since March 5th, fashion’s favorite influencer Chiara Ferragni and her husband Fedez made a personal donation of €100,000 to a GoFundMe fundraiser that is raising money for hospital beds for the Intensive Care Unit of the San Rafaelle Hospital in Milan while Donatella Versace along with her daughter Allegra Versace Beck made a €200,000 donation to the same hospital on March 13th. Says Versace, “Our hearts go out to all those who have been affected by this disease and to all the doctors and medical staff who have been working heroically non-stop in the past weeks in the effort to take care of our loved ones,” they said in a statement. “This is when we, as a society, need to stand together and care for one another.” One of the first designers to cancel his show this season in light of the pandemic that had just began it’s rampage across Europe, Giorgio Armani donated 1.25 million euros to a range of hospitals and Italian healthcare providers including the Luigi Sacco and San Raffaele hospitals, the Istituto dei Tumori in Milan and the Istituto Lazzaro Spallanzani in Rome.

Our hearts go out to all those who have been affected by this disease and to all the doctors and medical staff who have been working heroically non-stop in the past weeks in the effort to take care of our loved ones,” they said in a statement. “This is when we, as a society, need to stand together and care for one another.

A number of the big names in the beauty industry including Estée Lauder, Shiseido Japan, L’Oréal as well as the international conglomerates of COTY and LVMH have switched to production of hydroalcoholic gel to combat the sudden influx in demand for hand sanitisers across the globe. In an official statement by the company, a representative for LVMH quoted, “Through this initiative, LVMH intends to help address the risk of a lack of product in France and enable a greater number of people to continue to take the right action to protect themselves from the spread of the virus. LVMH will continue to honor this commitment for as long as necessary, in connection with the French health authorities.” Going a step further, DTC brand Glossier has announced it will give away samples of their hand cream to healthcare workers across the United States to combat the dry skin caused by constantly washing and sanitising the hands.

Through this initiative (of switching our production lines to manufacture hydroalcoholic acid), LVMH intends to help address the risk of a lack of product in France and enable a greater number of people to continue to take the right action to protect themselves from the spread of the virus. LVMH will continue to honor this commitment for as long as necessary, in connection with the French health authorities.

While the petite mains from the House of Chanel can typically take anywhere between six months to a year to create a piece of haute couture, a select faction is hard at work in a bid to donate over 50,000 masks as soon as it can to healthcare workers across Europe while awaiting approval to begin production on hospital gowns and protective masks. On the other hand, Dior has also reopened it’s Baby Dior factories in Redon, France to enable production of protective masks, in addition to it’s production of hand sanitiser. The brand took to it’s Instagram on March 31st to make the announcement and note the efforts of it’s petite mains who have voluntarily taken up the task to aid those fighting against the pandemic on the front lines.

There are also a number of brands and independent artists who have chosen to contribute towards relief efforts albeit slightly differently with creative content that is administered via the brand’s social media channels and aims to foster an atmosphere of positivity and a culture of solidarity; reiterating the idea that while social distancing may call for physical separation from your loved ones, it is actually a great time to (virtually) reconnect with your loved ones and yourself. Alexander McQueen launched a weekly challenge on the brand’s Instagram page, calling on the community to respond and react to the challenges – ranging from illustrating the brand’s iconic Rose Dress to creating a three dimensional flower – as creatively as possible. Plenty of others, like AISPI, have taken to Instagram Live to cultivate conversations among creatives – both big and small – that educate, empower and shine the light on the smaller brands and designer labels of Europe.

There are others still, who have chosen to partner with charities to donate a portion of their sales to aid essential and healthcare workers in their communities. Cult Gaia – the fashion label that rose to popularity with the launch of their iconic bags – has partnered with No Kid Hungry and will donate ten percent of every purchase to the organisation. And in addition to funding research by the University of Oxford to develop a single-dose vaccine that is on track to begin human trials next month, Burberry will also be making significant donations to FareShare and The Felix Project to supply meals to those in need.

While fashion has, over the years, been misinterpreted at times as being too frivolous or superficial, it is during moments like these that both industry insiders and others can truly see the impact that the collective efforts of those that are a part of the industry can have across the world. The fashion industry has the unique ability to aid in and provide relief efforts that may not always be tangible, but are at par in it’s ability to bring about a sense of hope and foster unity across the world.

Follow the AISPI blog and Instagram for more on the latest news from the fashion industry in Europe and beyond!

Studio Marković: knitwear with a heart

The not-so-usual journey of Alexia Hentsch

Fashion illustrators – and the broader artist community – are having a moment. When much…

Hi Lena, let’s start by sharing with our readers a little about who you are and what you do. My name…